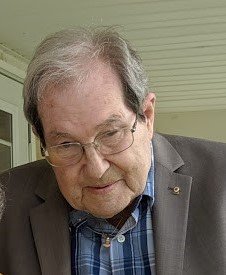 Frederick Charles LeMaster, D.O. was born on March 5, 1931 in Clay Center, KS to Frederick Earl LeMaster, D.O. and Marvel Aura (Potter) LeMaster.  Fred passed from this life on Sunday, November 17, 2019 in Broken Arrow, OK at the age of 88.

Fred was raised in Washington, KS and met the love of his life, Doris Lorraine Neu, the summer of 1945 in the dime store where Fred worked for Carl and Vera Fay Rosenkranz. Fred and Doris married July 5, 1953, after Fred graduated from Phillips University in Enid, OK.  That fall they moved to Kirksville, MO so Fred could attend Kirksville College of Osteopathic Medicine, following in his father’s footsteps. He graduated the spring of 1957, moved to Tulsa, OK and interned at Oklahoma Osteopathic Hospital (OOH). Fred opened his practice in North Tulsa in 1958, then moved it to 12th and Peoria in 1977. Around 1983, Fred took a leave of absence from his practice after accepting the position of Director of Medical Education at OOH, which he held until the late 1980s. He returned to his practice and continued until retirement in 2001.

About the same time that Fred opened his Osteopathic practice, he joined the Suburban Acres Lions Club.  He served in all positions, including president several times, as it went through various name changes including North Tulsa, Tulsa Metro, and finally Tulsa Metro-McCullough Lions Club. He was instrumental in supporting the Lions concession trailer for several decades at the Tulsa State Fair, the original Great Raft Race, and other events around the Tulsa area. Fred was District 3-O Governor in 1969 and was named a Melvin Jones Fellow in 1991.  He was a third generation Lion and continued his membership until his death.

The family will receive friends 5-7PM Wednesday at the Ninde Brookside Funeral Home and funeral service will be held 2:00 P.M. Thursday at Fellowship Lutheran Church.  Burial will be in St. Paul Cemetery Washington, KS.