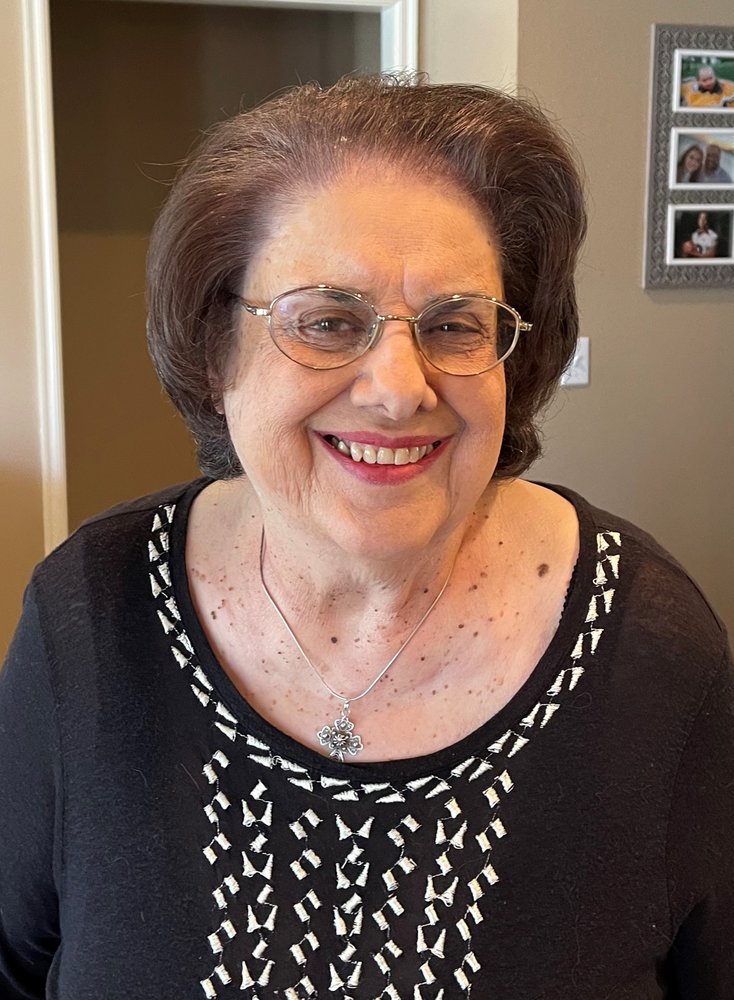 Please share a memory of Yvonne to include in a keepsake book for family and friends.
View Tribute Book
Yvonne Calfous Tsaras was born on July 21, 1934, in Brooklyn, New York to Dennis and Zoe Calfous. She passed from this life on Saturday, July 31, 2021, in Tulsa, Oklahoma, at the age of 87. She is preceded in death by her husband of 60 years, Demetrius J. Tsaras, her parents and her only brother, Dennis Calfous, Jr. She is survived by her three children and their spouses: Fr. John & Pres. Vicky Tsaras of Oklahoma City, OK, Joy and Stephen Konstans of Dallas, TX, and Paul and Stevi Anna Tsaras of Tulsa, Oklahoma; her grandchildren, Kevin & Cheyanne Tsaras, Katherine & Reed Bastie, Demetri Tsaras, Christianna Konstans, Sarah Konstans and Eleni Tsaras; three great-grandchildren, Marley Tsaras, Ezekiel Tsaras and John Bastie; and many nieces and nephews. Born to Greek-American parents, Yvonne was raised on the East coast, primarily in New York, New Jersey and Philadelphia. After high school, she began working for American Airlines in New York at the age of 17. Starting in the mail room and working her way through various jobs and departments, she eventually landed in Audits and Security. A lover of adventure and travel, Yvonne took advantage of her American Airlines benefits and traveled extensively, taking many trips to Mexico, the Caribbean and Cuba. A strikingly beautiful woman, she had many suitors, including a bull fighter and the president of Mexico’s son. It was at American Airlines that she met her future husband, Demetri, a Greek immigrant, who was, incidentally, the only Greek boy that she ever dated. Demetri proposed to Yvonne on their second date, and they were married on January 21, 1961. Demetri’s career at American Airlines took the couple to Tulsa, Oklahoma, in 1966, and there they made their home, raised their three children and were active members of Holy Trinity Greek Orthodox Church. Yvonne had the gift of hospitality, always opening her home and her kitchen to family and friends and expressing her love through her talents in the kitchen, cooking and baking homemade Greek delicacies. She was a creative artist at heart – painting, sewing, sculpting and crafting throughout her life. She loved music and concerts and amassed a large collection of musicals that she often shared with her grandchildren. She was spirited, feisty, smart, hard-working and stylish. Ever a stickler for etiquette and all-things-proper, she made sure her children and grandchildren knew there was a “right way” to set a table, write a thank-you note, dress for church and do most anything. She always had her hair and nails done, her lipstick on and matching heels and handbag. Her family and her faith were her life, and she has passed on this legacy of love to all who knew her. While she will be dearly missed, her family rejoices that she is now home with her Lord and Savior Jesus Christ and reunited with the love of her life. The viewing/trisagion will be Wednesday, August 4, at 7 p.m. at Ninde Funeral Home, and the funeral will be Thursday, August 5, at 10 a.m., at Holy Trinity Greek Orthodox Church in Tulsa. Internment at 2:30 p.m. at Rose Hill Burial Park in Oklahoma City, OK. In lieu of flowers, donations may be made to Holy Trinity Greek Orthodox Church Building Fund, 1222 S. Guthrie, Tulsa, OK 74119.
Wednesday
4
August

Look inside to read what others have shared
Family and friends are coming together online to create a special keepsake. Every memory left on the online obituary will be automatically included in this book.
View Tribute Book
Share Your Memory of
Yvonne
Upload Your Memory View All Memories
Be the first to upload a memory!
Share A Memory
Plant a Tree