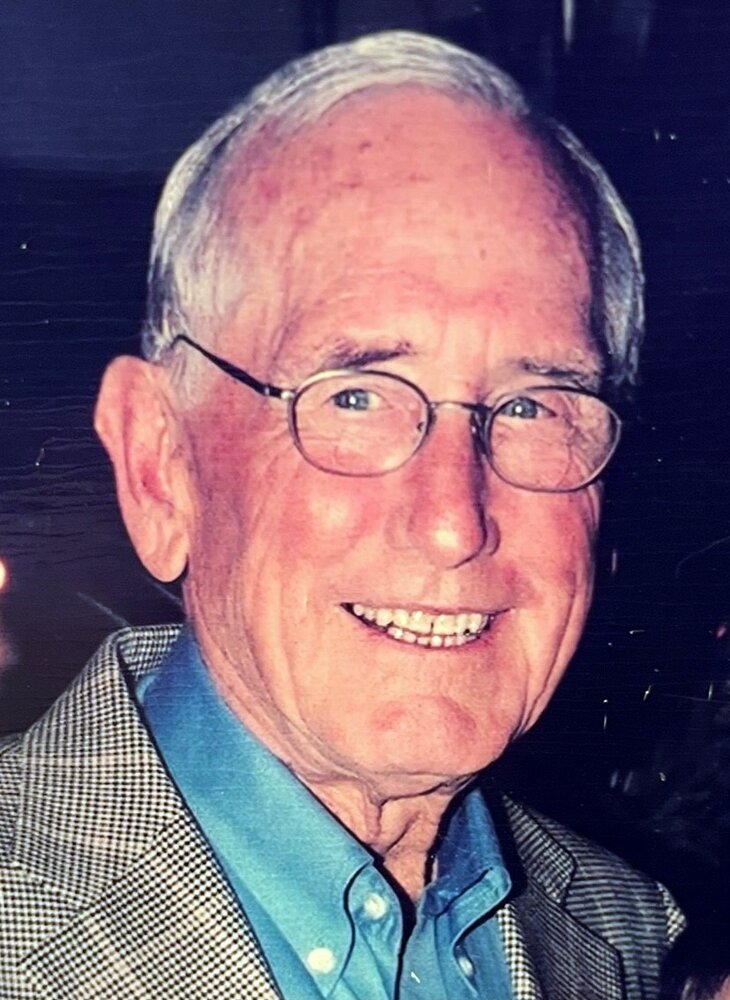 Please share a memory of John to include in a keepsake book for family and friends.
View Tribute Book

John Cassidy Jr., 98, of Tulsa, Oklahoma passed away on January 2nd, 2023. John was born on June 5th, 1924 to John and Opal Marie (Newsome) Cassidy in Frederick, Oklahoma. John grew up during the Great Depression in a two-room farmhouse without plumbing or electricity. Life on the farm was demanding and difficult. As the only son, he helped his father plow the fields with a mule during the day and milked the cows at night. Rainwater was collected in a cistern. On occasional trips into town, John’s mother would barter homemade butter for haircuts for the children, saving every penny possible to help fund her children’s future education. He graduated from Frederick High School in 1941.

After high school, John went on to study petroleum engineering at the University of Oklahoma. He enlisted into the U.S. Navy during World War II, though by the time he finished flight school the war had just ended. He returned to college to finish his degree in 1947.

It took 15 years before he’d finally discover oil on the homestead.

Throughout the 1950s, he worked for an oil producer in Texas before starting his own drilling company. Economic conditions guided him to also form a small well servicing operation to subsidize his drilling endeavors. Over the next two decades, John’s work would encompass five companies with over 450 employees on the payroll at one point. Timing and instinct guided his business decisions, often selling out at the right time, and buying used equipment when most of the industry was liquidating. John married Ernestine Broadhurst in 1956.

John is survived by his daughter, Ann Shannon Cassidy, his two grandchildren, Kelsey Baker and William Baker, his nephew, Robert Lee Dickey Jr. (Lynn) of Abilene, TX, and his niece, Jane Buettner (Michael) of Cohasset, MA. He was predeceased by his parents, John and Opal Marie Cassidy, his two sisters, Rose Marie Dickey and Betty Jo Waldrop, and his longtime partner, Laurie Burton.

John was energetic and thrived on challenges, often saying, “boom or bust, opportunity always knocks.” He traveled the world throughout the 1970s and 1980s buying and selling oilfield equipment, trekking to destinations as far-flung as North Africa, China, Kazakhstan, and South America, often with his daughter Ann joining him. He amassed a 160-acre stockpile of drilling machinery in Stroud, OK that was once the largest inventory of used oilfield equipment in the world. John purchased truckloads of equipment for 1 to 5 cents on the dollar, with auctioneers in England famously nicknaming him “the Crazy American.” In one year, John needed over a thousand truckloads to haul equipment to his “junk graveyard” in Stroud. He sold the bulk of his stockpile a decade later when the market was right where he wanted it, selling what remained as scrap metal for more than he purchased it.

John attributed his success to his appetite for risk, strong instincts, and a “contrarian mindset”. He received multiple awards for “Outstanding Small Businessman” in Oklahoma in the 1970s and gave a keynote address to the International Association of Drilling Contractors in 1986. His work landed him features in publications including Forbes, Time, Business Week, The Wall Street Journal, USA Today, People Magazine, The Financial Times, The Los Angeles Times, The Houston Chronicle, U.S. News, The Washington Post, and The South China Morning Post. He had representatives working around the world, and negotiated deals with Middle Eastern nobility, a Mexican state-owned oil company, and European governments. He sold a rig to the Libyan government in 1970, with representatives from Tripoli visiting Stroud to inspect it.

During the height of the Cold War, oil industrialists from communist Czechoslovakia visited Stroud as well as the family home in Frederick in the 1980s, where John’s mother served homemade fried chicken. According to John, a “secret police” agent was among those seated at the table. By this time, he’d purchased a new home for his parents in town. A delegation of 20 Russian executives visited in 1992 to tour the facilities in Stroud, topped off with a barbecue.

John’s motto was, “the crowd is always wrong.” He had a tireless work ethic and drove to his ranches in southwestern Oklahoma and western Texas on a monthly basis until the age of 93. He took an active role in the life of his grandchildren, and trips to his farms were what made him happiest.

John’s family would like to thank the individuals that cared for John in his final years, longtime family friend Maria Trujillo and Angel Green for their love, compassion, and caring expertise.